​The Fourth Sunday after the Epiphany
Morning Prayer

​All music printed by permission in accordance with ONE LICENSE, License #A-734784.   Permission to podcast/stream the music in this service obtained from ONE LICENSE with License #A-734784.
All rights reserved.
Welcome & Announcements
Throughout the service, the people remain muted, but join in the responses in bold in the bulletin,
​voiced by Bernadine Prygrosky.
Prelude 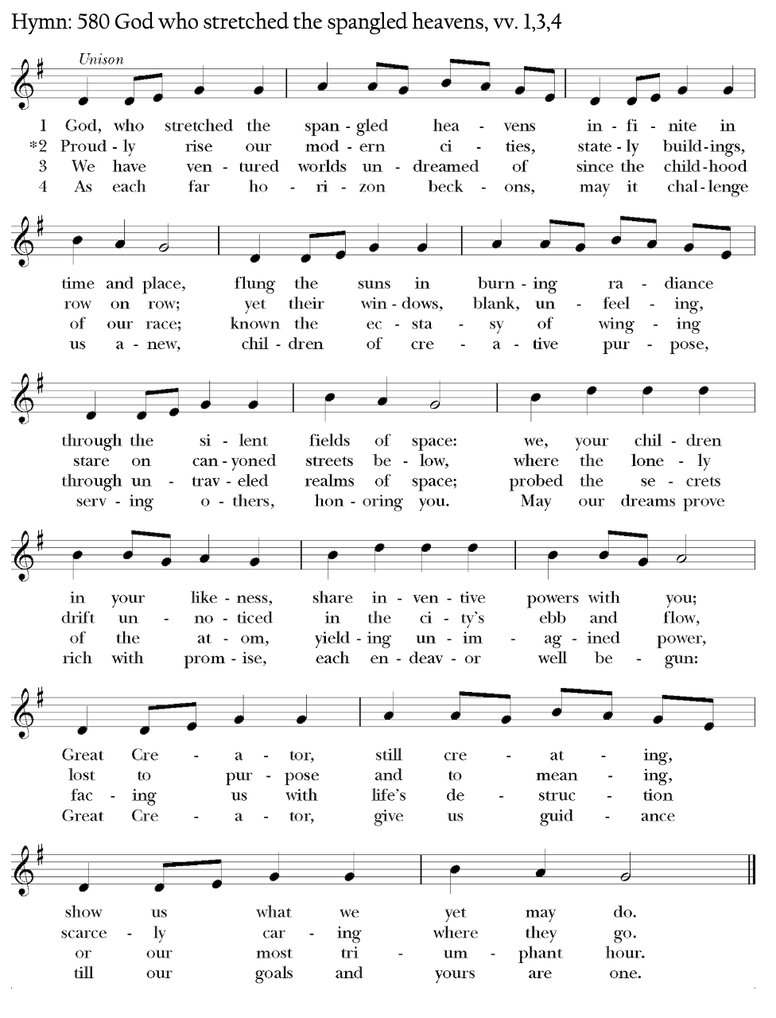 Nations shall come to your light, and kings to the brightness of your rising. Amen.
​Officiant 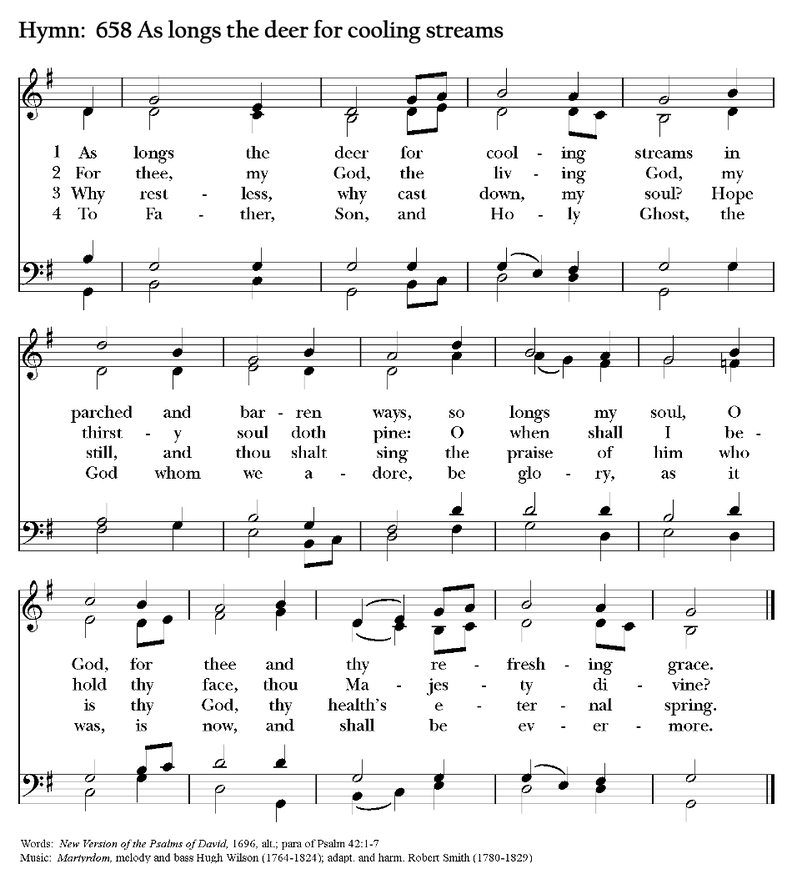 The earth is the LORD’S and all that is in it, *
the world and all who dwell therein.

For it is he who founded it upon the seas *
and made it firm upon the rivers of the deep.

“Who can ascend the hill of the LORD? *
and who can stand in his holy place?”
​
“Those who have clean hands and a pure heart, *
who have not pledged themselves to falsehood,
nor sworn by what is a fraud.

They shall receive a blessing from the LORD *
and a just reward from the God of their salvation.”

“Who is this King of glory?” *
“The LORD, strong and mighty,
the LORD, mighty in battle.”

Glory to the Father, and to the Son, and to the Holy Spirit: as it was in the
beginning, is now, and will be for ever. Amen.
The Lessons
A Reading from the Prophet Isaiah, 51:9-16, read by Deborah Medders

​Awake, awake, put on strength, O arm of the LORD! Awake, as in days of old, the generations of long ago! Was it not you who cut Rahab in pieces, who pierced the dragon? Was it not you who dried up the sea, the waters of the great deep; who made the depths of the sea a way for the redeemed to cross over? So the ransomed of the LORD shall return, and come to Zion with singing; everlasting joy shall be upon their heads; they shall obtain joy and gladness, and sorrow and sighing shall flee away. I, I am he who comforts you; why then are you afraid of a mere mortal who must die, a human being who fades like grass? You have forgotten the LORD, your Maker, who stretched out the heavens and laid the foundations of the earth. You fear continually all day long because of the fury of the oppressor, who is bent on destruction. But where is the fury of the oppressor? The oppressed shall speedily be released; they shall not die and go down to the Pit, nor shall they lack bread. For I am the LORD your God, who stirs up the sea so that its waves roar— the LORD of hosts is his name. I have put my words in your mouth, and hidden you in the shadow of my hand, stretching out the heavens and laying the foundations of the earth, and saying to Zion, “You are my people.”

By faith Abraham obeyed when he was called to set out for a place that he was to receive as an inheritance; and he set out, not knowing where he was going. By faith he stayed for a time in the land he had been promised, as in a foreign land, living in tents, as did Isaac and Jacob, who were heirs with him of the same promise. For he looked forward to the city that has foundations, whose architect and builder is God. By faith he received power of procreation, even though he was too old—and Sarah herself was barren—because he considered him faithful who had promised. Therefore from one person, and this one as good as dead, descendants were born, ‘as many as the stars of heaven and as the innumerable grains of sand by the seashore.’
All of these died in faith without having received the promises, but from a distance they saw and greeted them. They confessed that they were strangers and foreigners on the earth, for people who speak in this way make it clear that they are seeking a homeland. f they had been thinking of the land that they had left behind, they would have had opportunity to return. But as it is, they desire a better country, that is, a heavenly one. Therefore God is not ashamed to be called their God; indeed, he has prepared a city for them.

The Word of the Lord.
Thanks be to God. 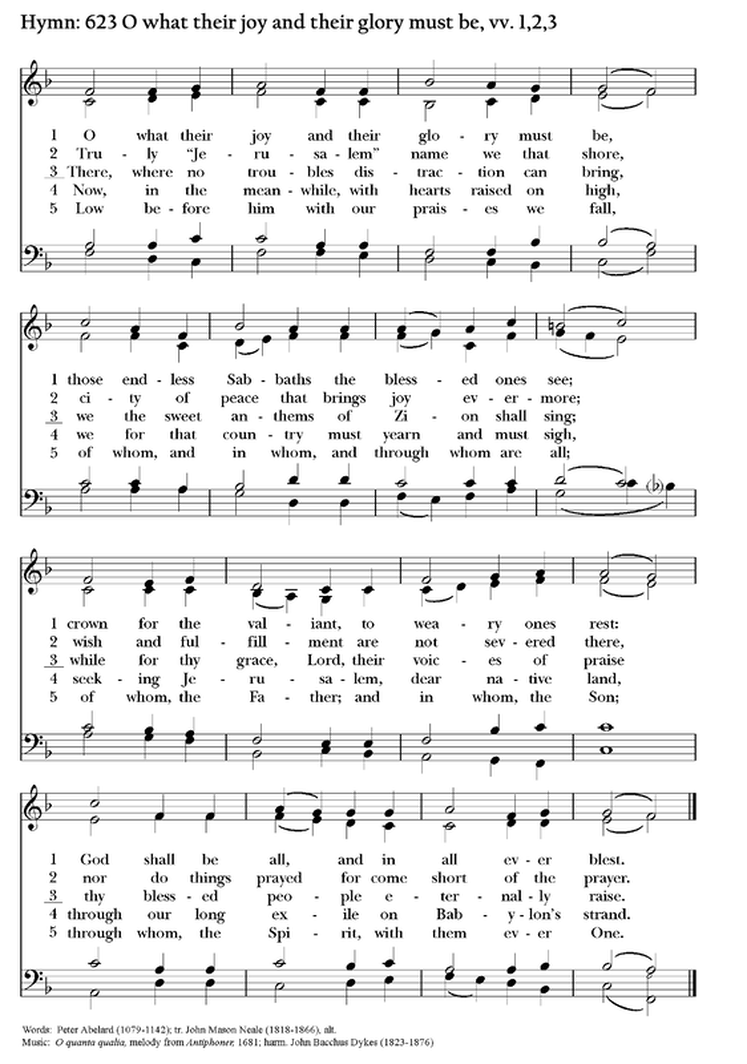 ​About the middle of the festival Jesus went up into the temple and began to teach. The Jews were astonished at it, saying, “How does this man have such learning, when he has never been taught?” Then Jesus answered them, “My teaching is not mine but his who sent me. Anyone who resolves to do the will of God will know whether the teaching is from God or whether I am speaking on my own. Those who speak on their own seek their own glory; but the one who seeks the glory of him who sent him is true, and there is nothing false in him. “Did not Moses give you the law? Yet none of you keeps the law. Why are you looking for an opportunity to kill me?” The crowd answered, “You have a demon! Who is trying to kill you?” Jesus answered them, “I performed one work, and all of you are astonished. Moses gave you circumcision (it is, of course, not from Moses, but from the patriarchs), and you circumcise a man on the sabbath. If a man receives circumcision on the sabbath in order that the law of Moses may not be broken, are you angry with me because I healed a man’s whole body on the sabbath? Do not judge by appearances, but judge with right judgment.” Now some of the people of Jerusalem were saying, “Is not this the man whom they are trying to kill? And here he is, speaking openly, but they say nothing to him! Can it be that the authorities really know that this is the Messiah? Yet we know where this man is from; but when the Messiah comes, no one will know where he is from.” Then Jesus cried out as he was teaching in the temple, “You know me, and you know where I am from. I have not come on my own. But the one who sent me is true, and you do not know him. I know him, because I am from him, and he sent me.” Then they tried to arrest him, but no one laid hands on him, because his hour had not yet come. Yet many in the crowd believed in him and were saying, “When the Messiah comes, will he do more signs than this man has done?”

Almighty and everlasting God, you govern all things both in heaven and on earth:  Mercifully hear the supplications of your people, and in our time grant us your peace; through Jesus Christ our Lord, who lives and reigns with you and the Holy Spirit, one God, for ever and ever. Amen.
A Prayer for Social Justice

Grant, O God, that your holy and life-giving Spirit may so move every human heart and especially the hearts of the people of this land, that barriers which divide us may crumble, suspicions disappear, and hatreds cease; that our divisions being healed, we may live in justice and peace; through Jesus Christ our Lord.  Amen.
A Collect for Guidance

Heavenly Father, in you we live and move and have our being:  We humbly pray you so to guide and govern us by your Holy Spirit, that in all the cares ad occupations of our life we may not forget you, but may remember that we are ever walking in your sight; through Jesus Christ our Lord.  Amen. 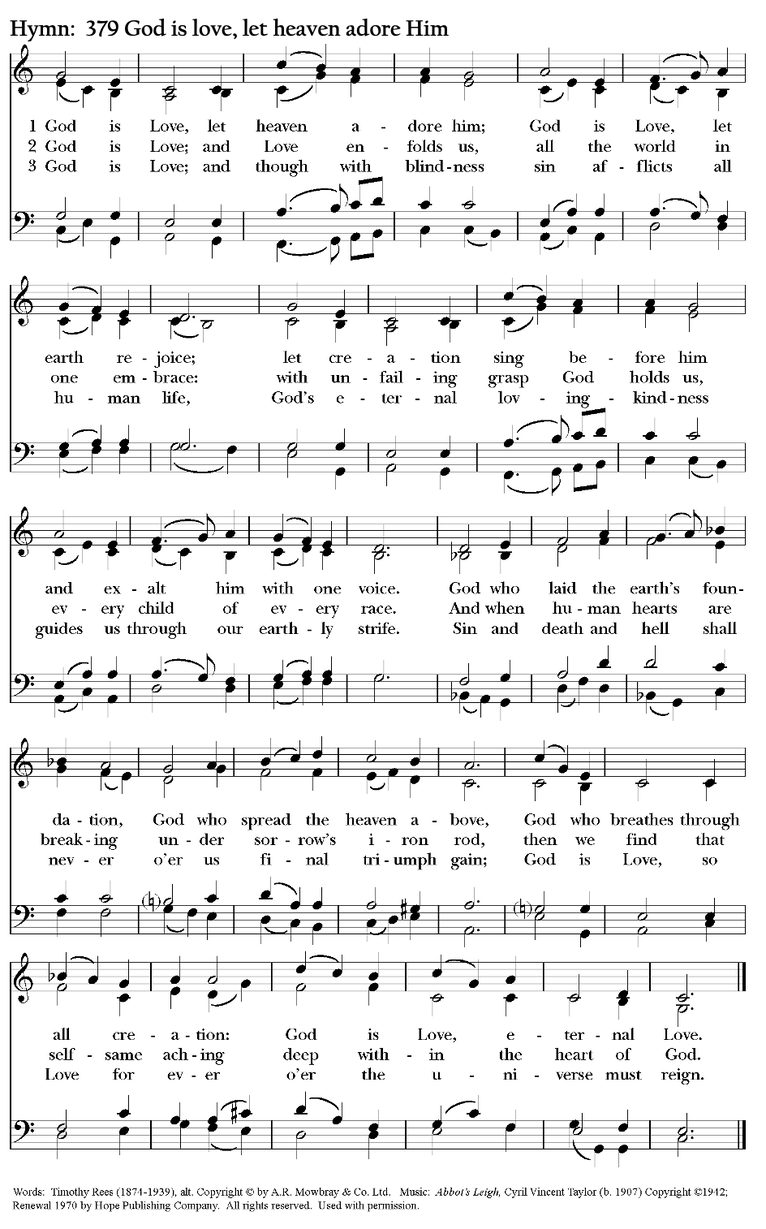 Prayers and Thanksgivings
A Prayer of St. Chrysostom

Almighty God, you have given us grace at this time with one accord to make our common supplication to you; and you have promised through your well-beloved Son that when two or three are gathered together in his Name you will be in the midst of them: Fulfill now, O Lord, our desires and petitions as may be best for us; granting us in this world knowledge of your truth, and in the age to come life everlasting. Amen.
Let us bless the Lord.
Thanks be to God. 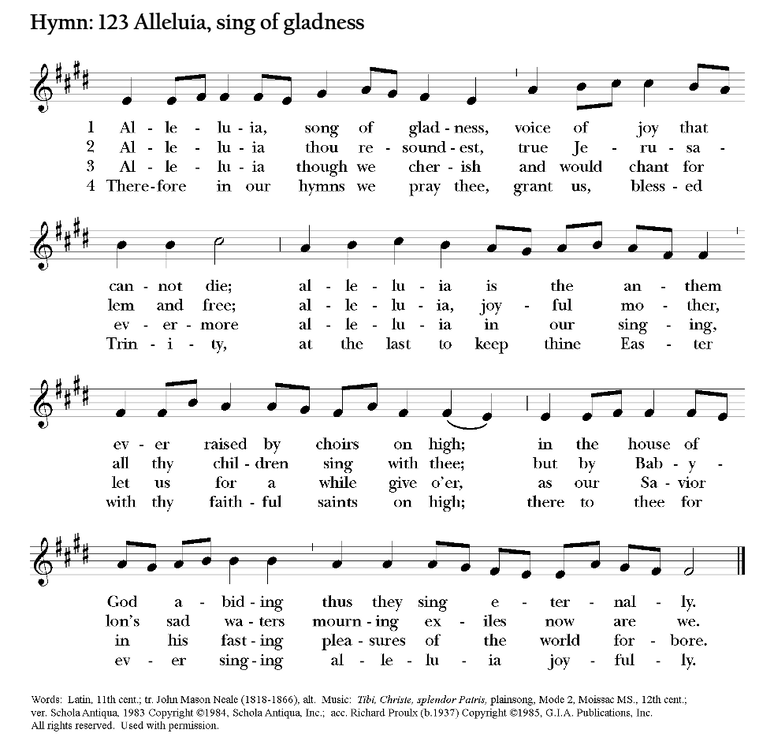 Joe, our President, Kamala, our Vice President
The Members of Congress; Charlie our Governor, and our elected officials
Our Country, as we make the transition to a new administration

All Staff of the Martha’s Vineyard Hospital
Our Vineyard EMS, Fire, and Police Departments
All the Members of the New York City Fire Department

We pray for all those who are sick with Covid-19; all those who are dying from it; all who have survived it; those who have died from it; their families; and all who are caring for them
Those who by virtue of their work are putting themselves at risk
Those staying home and practicing social distancing