The History of Grace Church 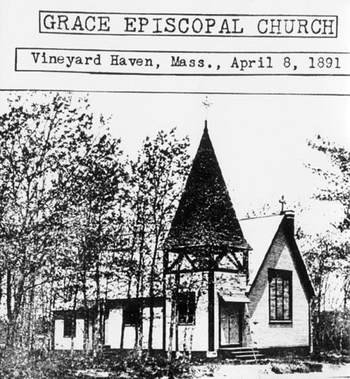 The first recorded Episcopal service on Martha’s Vineyard occurred on Christmas Day, 1862 at Capawock Hall (now the Masonic Hall, Church Street in Vineyard Haven).
Later, that same year, an association was formed with the express purpose  to separate from the Church of the Messiah in Woods Hole and to “form an association for the purpose of raising money to build a Church in Vineyard Haven.” Architect W. Frank Hurd of Boston was hired to design the Church building. The laying of the corner-stone for Grace Church occurred on September 26, 1882 and the building  was completed in 1883. On Sunday, June 3, 1883, Mr. R. A. Ottiwell presided over the first service at Grace Church with approximately 100 persons attending.
The Church was built on land donated by Colonel Asa B. Carey and his wife, Laura, and was located where the Unitarian Church now stands on Main Street in Vineyard Haven. Later, in 1896, Thomas Tankerman conveyed a lot of land on the corner of William Street and Woodlawn Avenue to the “Protestant Episcopal Church”. During the ministry of Reverend William Hicks (1894-1898) the Church was moved to its present location on the corner of William Street and Woodlawn Avenue.
1898 - 1919
Grace Church experienced a series of interim clergy and lay missionaries. Then, in 1919, after years of transient priests, John Higginson Cabot became priest-in-charge and remained until 1925. It was during his tenure that the sacristy and parish hall were built.  In 1926 Edith Carey Walker transferred a lot on the corner of Woodlawn Avenue and Franklin Street to a trust later transferred to the “Protestant Episcopal Church”.  That lot was later to become the place where the current Rectory was built.  Arthur Bradford Papineau came to the mission in 1925 and was here for 13 years. Through his ministry Grace Church continued to take its place among the established congregations on the Vineyard.
The twenty years from 1939 to 1959 were a time of building. The Reverend John Golding, who came in 1939, established an active music program. The Reverend Thomas Lehman served as rector from 1953-1960. The Parish House on Woodlawn Avenue was built, and he commissioned Allen Crite, a distinguished African-American artist, to paint the mural in the children’s chapel. The Church building soon became the center for a wide variety of community activities and a pivotal center for social action and community gatherings.
1960 – 1986

In 1960 the Reverend Henry L. Bird arrived. Reflecting the times, he was concerned with justice and equality. Inspired by the leadership and writings of Dr.  Martin Luther King Jr., he joined with several parishioners in supporting the creation  of a
chapter of the NAACP on the Island. Eventually, his convictions took him to the Civil Rights march in Selma, Alabama. The social activism that Grace Church represented under the leadership of Reverend Bird was not embraced by all parishioners at the time. In fact, it is thought that this disaffected group of parishioners greatly contributed to the establishment of St. Andrews parish in Edgartown as an independent parish.
The Reverend Donald H. Lyons was appointed Rector in 1966. He consolidated Grace Church’s role as a liberal, socially active church, addressing such problems and concerns of Island life as high school regionalization, the need for mental health services, and the need for programs and activities for Island youth. During his tenure as Rector, the Church provided land from an earlier bequest for a permanent site for the Lamb family’s Camp Jabberwocky. Participants in this program for physically and mentally disabled persons are still an important part of summer worship at Grace Church. The  GraceGrace Church choir under Rector Lyonsat Lyons  initiated a performance of Part I of Handel’s Messiah which soon became part of the Island Community Chorus’s regular performances during the Christmas Season. A coffee shop for Island teens, a large children’s choir,  and the formation of a basketball league all helped to solidify the importance of Grace Church in the life of the Island throughout the year. Donald Lyons continues to sing with the Grace Church Choir, reads scripture during the services, and is considered to be one of the Vineyard’s best leading actors and . Don recently celebrated his 90th birthday. A stained glass window was commissioned in hour of his service to the Church and is situated in the Parish Hall.
1986 – Present