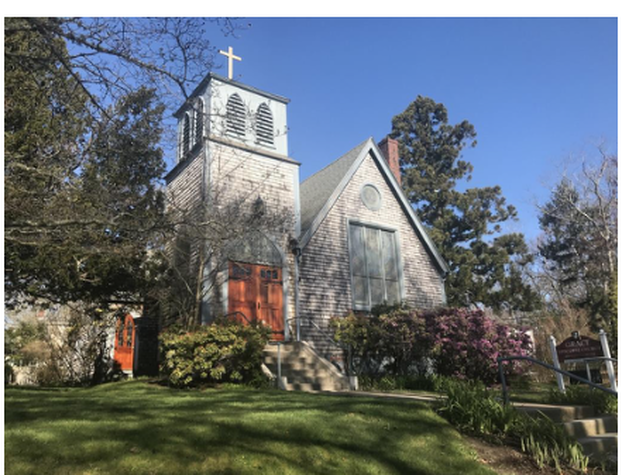 Throughout the service, the people remain muted, but join in the responses in bold in the bulletin,
​voiced by Roger McGary 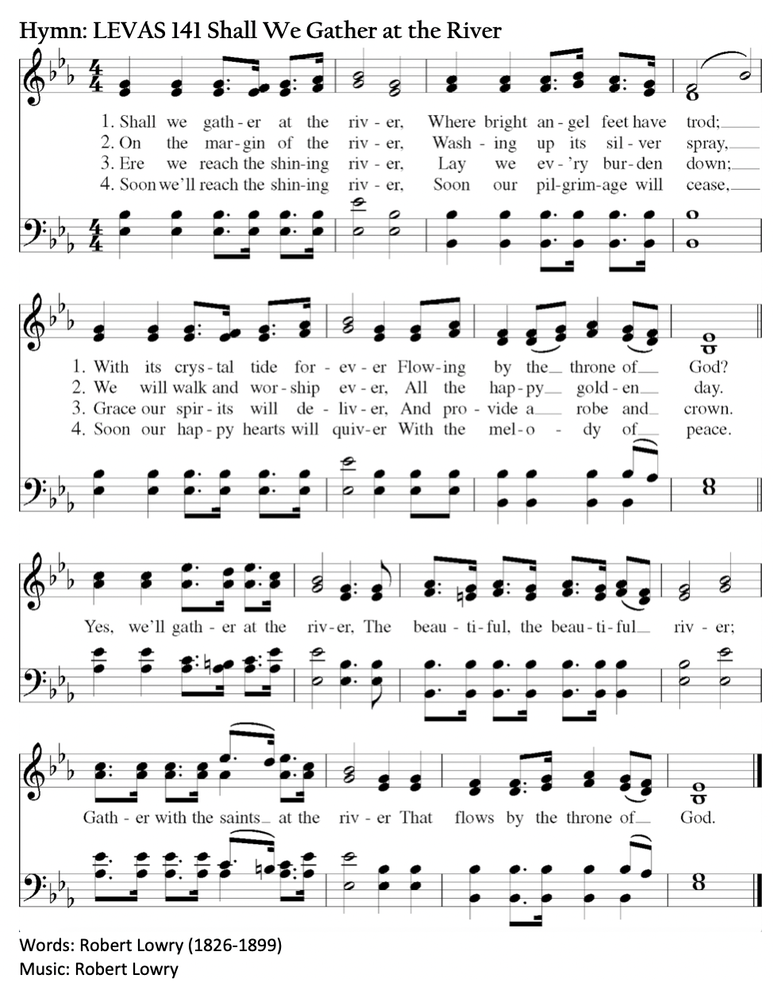 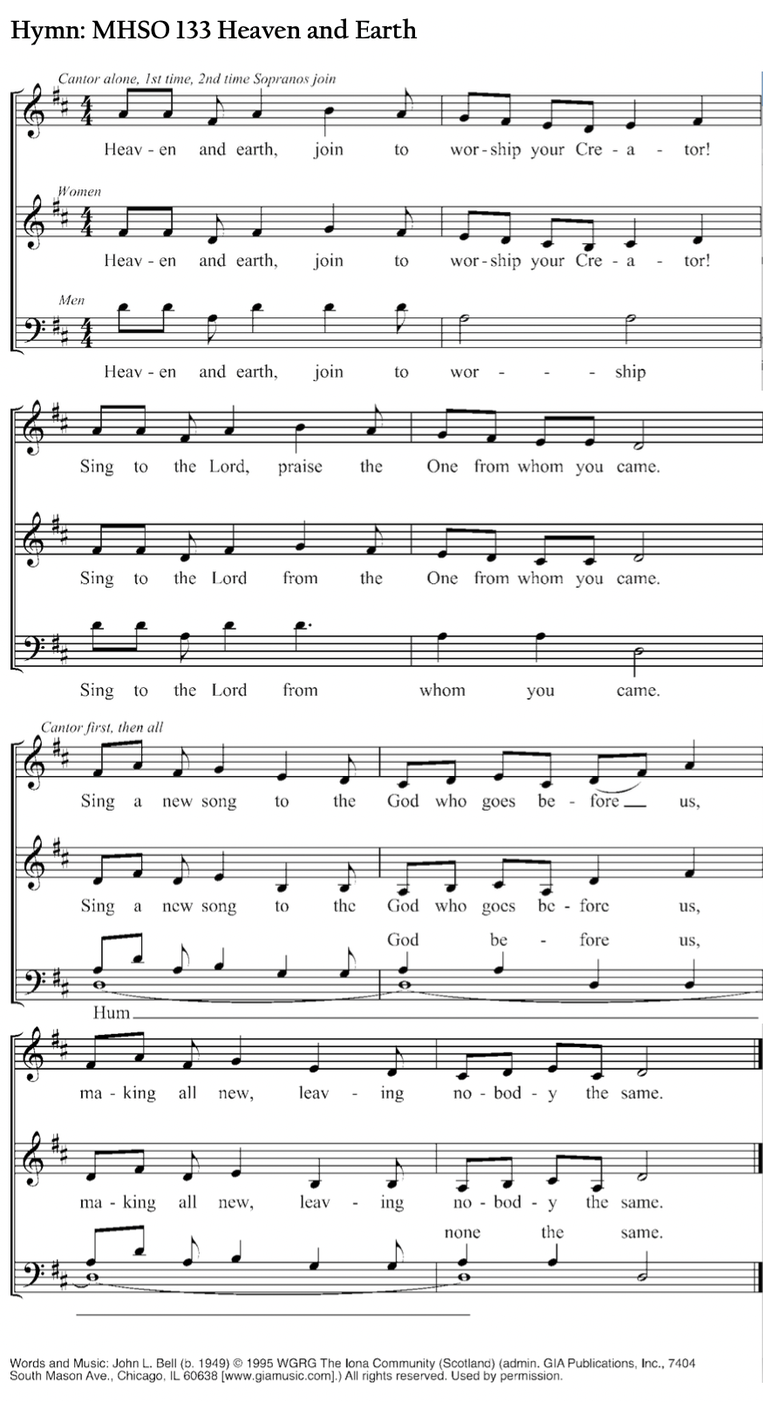 
If the Lord had not been on our side, *
let Israel now say;

If the Lord had not been on our side, *
when enemies rose up against us;

Then would they have swallowed us up alive *
in their fierce anger toward us;

Then would the waters have overwhelmed us *
and the torrent gone over us;

Then would the raging waters *
have gone right over us.

Blessed be the Lord! *
he has not given us over to be a prey for their teeth.

Our help is in the Name of the Lord, *
the maker of heaven and earth.

Glory to the Father, and to the Son, and to the Holy Spirit: as it was in the
beginning, is now, and will be for ever. Amen.
The Lessons

A Reading from Exodus 1:8-2:10 read by Bernadine Prygrosky

Now a new king arose over Egypt, who did not know Joseph. He said to his people, “Look, the Israelite people are more numerous and more powerful than we. Come, let us deal shrewdly with them, or they will increase and, in the event of war, join our enemies and fight against us and escape from the land.” Therefore they set taskmasters over them to oppress them with forced labor. They built supply cities, Pithom and Rameses, for Pharaoh. But the more they were oppressed, the more they multiplied and spread, so that the Egyptians came to dread the Israelites. The Egyptians became ruthless in imposing tasks on the Israelites, and made their lives bitter with hard service in mortar and brick and in every kind of field labor. They were ruthless in all the tasks that they imposed on them.

The king of Egypt said to the Hebrew midwives, one of whom was named Shiphrah and the other Puah, “When you act as midwives to the Hebrew women, and see them on the birthstool, if it is a boy, kill him; but if it is a girl, she shall live.” But the midwives feared God; they did not do as the king of Egypt commanded them, but they let the boys live. So the king of Egypt summoned the midwives and said to them, “Why have you done this, and allowed the boys to live?” The midwives said to Pharaoh, “Because the Hebrew women are not like the Egyptian women; for they are vigorous and give birth before the midwife comes to them.” So God dealt well with the midwives; and the people multiplied and became very strong. And because the midwives feared God, he gave them families. Then Pharaoh commanded all his people, “Every boy that is born to the Hebrews you shall throw into the Nile, but you shall let every girl live.”

Now a man from the house of Levi went and married a Levite woman. The woman conceived and bore a son; and when she saw that he was a fine baby, she hid him three months. When she could hide him no longer she got a papyrus basket for him, and plastered it with bitumen and pitch; she put the child in it and placed it among the reeds on the bank of the river. His sister stood at a distance, to see what would happen to him.
The daughter of Pharaoh came down to bathe at the river, while her attendants walked beside the river. She saw the basket among the reeds and sent her maid to bring it. When she opened it, she saw the child. He was crying, and she took pity on him, “This must be one of the Hebrews’ children,” she said. Then his sister said to Pharaoh’s daughter, “Shall I go and get you a nurse from the Hebrew women to nurse the child for you?” Pharaoh’s daughter said to her, “Yes.” So the girl went and called the child’s mother. Pharaoh’s daughter said to her, “Take this child and nurse it for me, and I will give you your wages.” So the woman took the child and nursed it. When the child grew up, she brought him to Pharaoh’s daughter, and she took him as her son. She named him Moses, “because,” she said, “I drew him out of the water.”
​
The Word of the Lord.
Thanks be to God.
​
A Reading from Romans 12:1-8  read by John Hickey

​I appeal to you therefore, brothers and sisters, by the mercies of God, to present your bodies as a living sacrifice, holy and acceptable to God, which is your spiritual worship. Do not be conformed to this world, but be transformed by the renewing of your minds, so that you may discern what is the will of God-- what is good and acceptable and perfect.

For by the grace given to me I say to everyone among you not to think of yourself more highly than you ought to think, but to think with sober judgment, each according to the measure of faith that God has assigned. For as in one body we have many members, and not all the members have the same function, so we, who are many, are one body in Christ, and individually we are members one of another. We have gifts that differ according to the grace given to us: prophecy, in proportion to faith; ministry, in ministering; the teacher, in teaching; the exhorter, in exhortation; the giver, in generosity; the leader, in diligence; the compassionate, in cheerfulness.
​
The Word of the Lord.
Thanks be to God 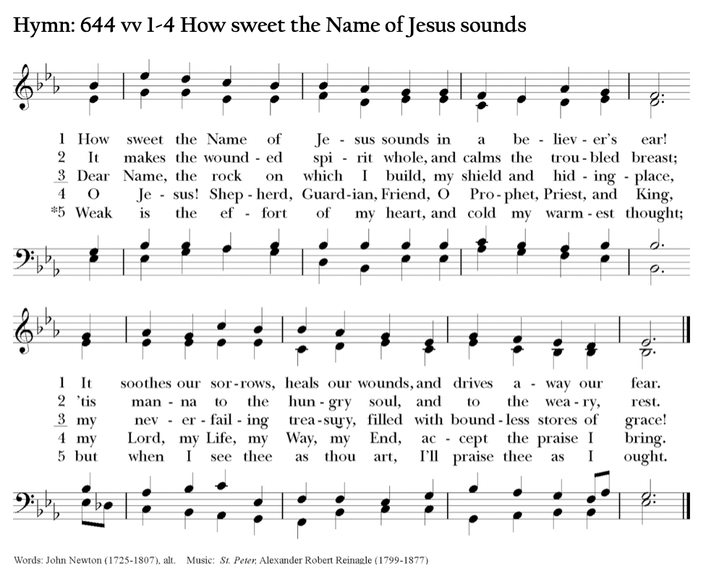 When Jesus came into the district of Caesarea Philippi, he asked his disciples, “Who do people say that the Son of Man is?” And they said, “Some say John the Baptist, but others Elijah, and still others Jeremiah or one of the prophets.” He said to them, “But who do you say that I am?” Simon Peter answered, “You are the Messiah, the Son of the living God.” And Jesus answered him, “Blessed are you, Simon son of Jonah! For flesh and blood has not revealed this to you, but my Father in heaven. And I tell you, you are Peter, and on this rock I will build my church, and the gates of Hades will not prevail against it. I will give you the keys of the kingdom of heaven, and whatever you bind on earth will be bound in heaven, and whatever you loose on earth will be loosed in heaven.” Then he sternly ordered the disciples not to tell anyone that he was the Messiah.

The Word of the Lord.
Thanks be to God.
​

The Collect of the Day

Grant, O merciful God, that your Church, being gathered together in unity by your Holy Spirit, may show forth your power among all peoples, to the glory of your Name; through Jesus Christ our Lord, who lives and reigns with you and the Holy Spirt, one God, for ever and ever. Amen.
​ 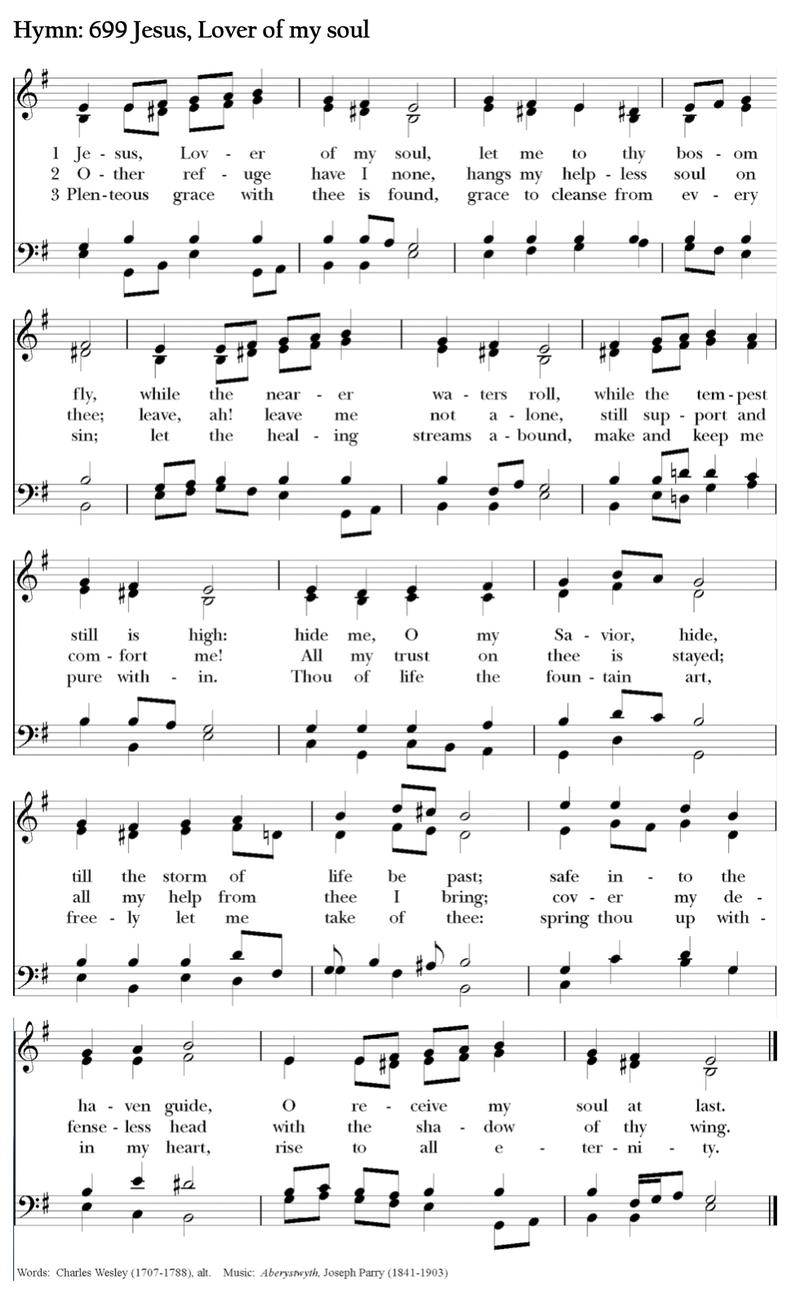 General Prayers
Prayers and Thanksgivings
A Prayer of St. Chrysostom

​Almighty God, you have given us grace at this time with one accord to make our common supplication to you; and you have promised through your well-beloved Son that when two or three are gathered together in his Name you will be in the midst of them: Fulfill now, O Lord, our desires and petitions as may be best for us; granting us in this world knowledge of your truth, and in the age to come life everlasting.

The grace of our Lord Jesus Christ, and the love of God, and the fellowship of the Holy Spirit, be with us all evermore. Amen.
​ 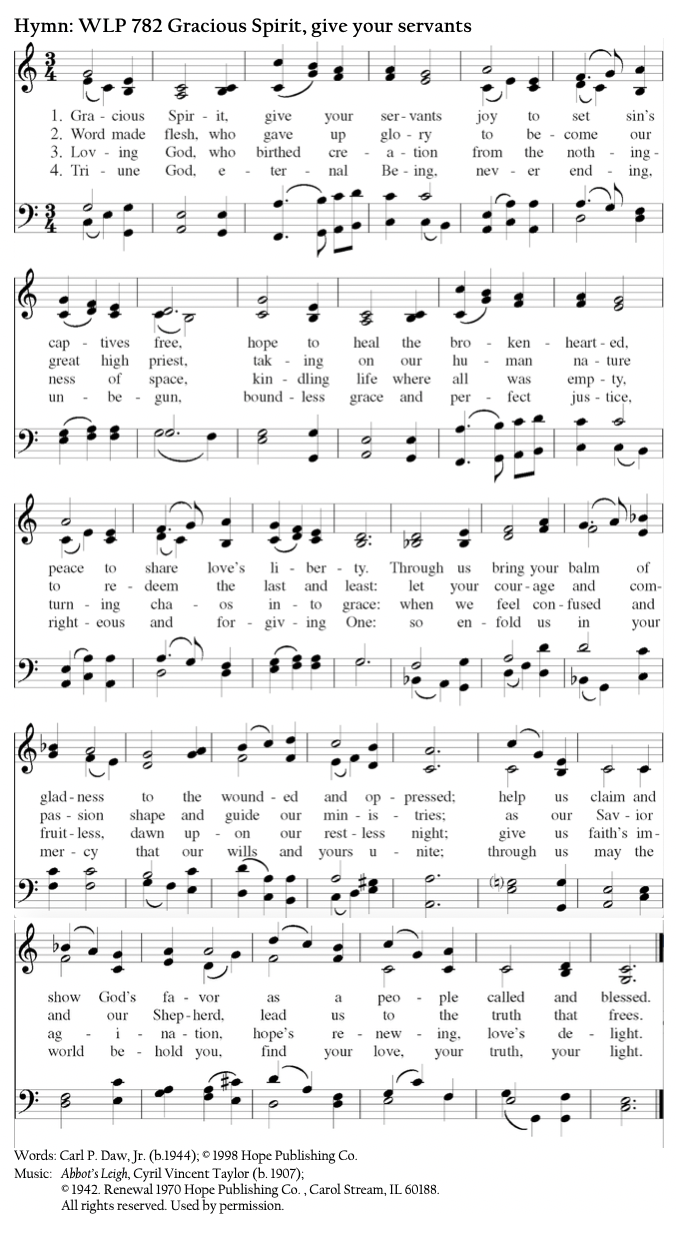 All are invited to stay for a Parish Meeting immediately following the Postlude.
Sunday Prayers

Our Country, as we prepare for the election.

Those who have died:
Joan, Margaret, Nancy, Terry
George, Ahmaud, Breonna & all those killed because of oppression, hatred or the color of their skin
Assisting in our service today